McKaskle, who is running for District 2 against incumbent Estelle Fennell, has a long history of civic involvement in Southern Humboldt, having served on the Redway Community Services District board for 6 years and as chair of the Redwood Region Economic Development Commission. One of his primary issues is preparation for the effects of climate change, which is one of the reasons he decided to run for the Board of Supervisors. “I jumped in at the last minute in large part because I felt the environment was not enough of an issue. We need to plan for sea-level rise. We need a more localized economy,” said McKaskle. “We need walkable towns and a world-class trail network between them, and through our world-class scenery. Much of this is land-use regulation, that is what we do as County Supervisors and we can do better.”
In addition to meeting the challenges posed by climate change and sea-level rise, as a Supervisor McKaskle would work to create officially sanctioned, sanitary campgrounds for houseless people. This, along with his support of public banking and renewable energy micro-grids, is why NCPA members voted to put their support behind him.

Ya Rex, you’ve had 8 years and you’ve FAILED!

Last Wednesday night, Rex Bohn was finally confronted directly about his bigotted comment that he made at a fundraiser last year. Bohn asked if a Mexican tamale dinner was authentic enough “to make you go out and steal hub caps,” using a tired old racist stereotype about Mexican people and crime.

Outrage has followed since Bohn’s racist slur, but he was adamant at the Wednesday night candidate forum that his “Hispanic friends” forgave him. “They know I don’t have a racist bone in my body,” he said.

Cliff Berkowitz, his opponent, was unforgiving of Rex’s half-ass apology, saying Bohn “should have apologized straight out.

Here are three great letters from the Times-Standard:

It is time to get rid of the 1st District incumbent

A county supervisor’s No. 1 job is to make decisions. Unfortunately, the 1st District incumbent has a long history of bad decisions. He supported such money pits as an untenable east-west Railroad, a potentially hazardous liquefied natural gas terminal, and an environmentally disastrous onshore wind farm. He appointed a climate denier to the planning department. When confronted on the incompetency

of a public defender, his response was to have lunch with the man and declare him a good guy. (He may be a good guy, but he was the wrong guy and letting him go cost the county $50,000. Other bad personnel decisions have cost us many thousands more.) He supports a plan that encourages large cannabis grows at the expense of mom-and-pop operations, which hurts our local economy (and benefits his son). He has failed to insist that the Humboldt County fair board comply with the Brown Act, which means the fair loses much-needed state funds. His motto of “Humboldt is open for business” risks turning our unique home into a sprawling mass of tract homes and chain stores.

I could go on. These are just a few of the reasons it is time to get rid of the incumbent and elect someone with integrity, someone who is fair, transparent, and has given 25 years of service to Humboldt County.

I’ve heard it said many times that Rex is such a nice guy that he’d give you the shirt off his back — I cannot disagree with that. That very statement may be the reason for many of his decisions — he’s a pleaser and hates to disappoint.

I recall before a full municipal auditorium that he was touting the benefits of a Cal Pine liquefied natural gas plant on the bay — never mind the health effects of off-gassing or the fact that, if there were an accident, or in this day and age a terrorist attack, that most everything in a 5-mile radius would be incinerated. I believe that Cliff uses the “wisdom” of the people and not so much the promises of fast-talking out-of the- area lobbyists who have no skin in the game.

Eight years has been long enough to see we are getting nowhere; time to try a different perspective and approach.

First District voters — here’s your chance on March 3 to keep your eye on the ball, aim for the fence and hit it out of the park.

Berkowitz has been champ for many local causes

I want to thank Cliff Berkowitz for running for first district supervisor. I first became acquainted with Cliff through his work with KHUM radio. He has been involved in our community and has been a champion for many local causes for more than 25 years.

During the power outages, he was a lifeline to my family and the community. The announcements that he made on KHUM helped us to stay connected to what was happening. We heard updates on where we could buy gas, get a generator, which grocery stores were open, etc.

I know that Cliff is concerned with climate change and are rising sea levels. He cares about our land, water and preserving the resources that may Humboldt County desirable. Cliff is a strong proponent of our trail systems. And Cliff will work hard for us to create jobs and housing. 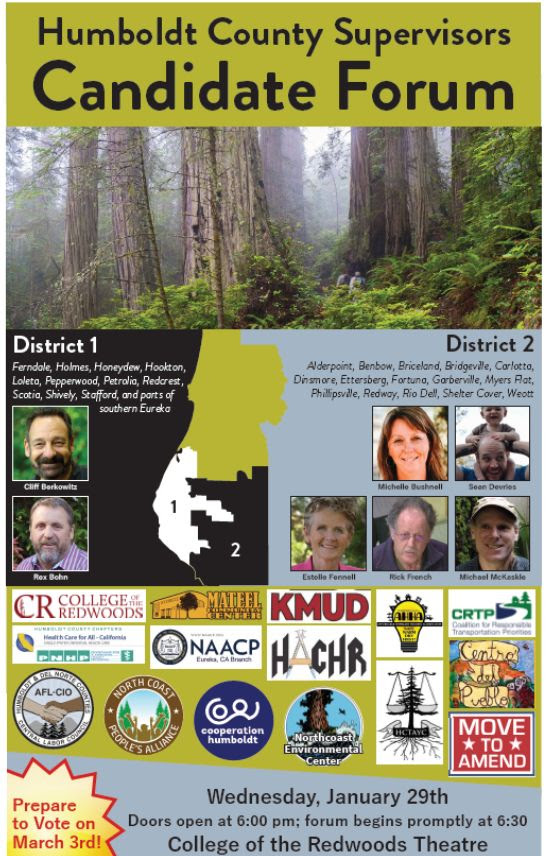 The North Coast People’s Alliance has unanimously endorsed Cliff Berkowitz for Humboldt County Board of Supervisors, District 1. Though Berkowitz has never held public office, NCPA members were impressed by his commitment to the community; he has spent the last 25 years building community relationships, working on domestic violence awareness, finding solutions to such issues as high gas prices, feeding the hungry, and helping the community through several crises using the power of radio.

Berkowitz also impressed members with his commitment to addressing climate change while acknowledging that not all “Green Energy” projects are created the same. In reference to the recent Humboldt Wind Energy Project proposal, he stated his dedication to respecting Native American needs and rights in all land-use decisions. Affordable housing, a living minimum wage, transparency and fairness in land use decisions and county road maintenance also feature largely in his platform.

“Cliff’s resolve to address sea-level rise and climate change, and his openness to declaring a climate emergency as a way to speed this process, is right in line with NCPA’s mission,” stated Treasurer Tamara McFarland. “He is the right choice for us in this race.”

The North Coast People’s Alliance organizes for social justice, economic justice, and environmental justice, with an emphasis on empowering everyday people to get involved in local politics and civic affairs. We believe that politics means much more than just voting and that our everyday actions can be political statements. We are striving for a just and truly democratic society where everyone’s voices are heard.

What’s up with our elected officials and appointed boards?
If it involves Cannabis Production it must be a great opportunity to cash in and we can tax the hell of it so let’s let them do whatever and use whatever polluted industrial site they want. Win-Win right? That seems to be the mentality of the regulators.
Then you have the greedy proponents who just want to get started printing money. We don’t care what was there before besides don’t you know who we are?
Actually, no we don’t, and it doesn’t matter. Pollution is pollution we don’t want it in our water whether it’s from Mercer Fraser or some hipster growers.

At the September 5 Planning Commission meeting, the County Planning Commission approved yet another permit for a development on the site of a former lumber mill without adequate soil sampling – this one is in Glendale, near Hall Creek and the Mad River – just upstream from the drinking water supply for 88,000 people. The Humboldt Bay Municipal Watershed joined Humboldt Baykeeper in calling for dioxin testing, but the majority of Commissioners waved those concerns away.

Now that Rex has a legitimate and viable opponent it’s time to focus on “pro dams on the Eel” Estelle Fennell. She has accomplished nothing for her district and will be remembered for appointing a terrible planning commissioner.
This has been one of the worst boards in the history of Humboldt County and they have done damage that will leave permanent scars.

On Sunday, Aug. 25 at 2 p.m., the Healy Senior Center in Redway will be available to discuss options and strategies to bring fresh vision to a sadly misdirected county. Absolutely necessary is a campaign to produce a candidate for 2nd District Supervisor to replace the current incumbent. Along with concerned community members, prospective candidates are welcome of course. There are no stipulations — but a willingness to refuse corporate contributions, rely on small donations and promote a door to door grassroots campaign is a good beginning. People power offers the assurance that when our successful candidate sits at the supervisors’ table, there won’t be big money under the table requiring the usual payoff. Nor will our successful candidate crumple before the powers-that-be, even sheriffs or governors.

If this seems close to your purpose, please bring your skill-set to this meeting. It will take a concerted effort to be successful. For more info, maybe, call Paul Encimer, 707-683-5772. Thanks and see you there.

Maybe that should say, racketeer instead of auctioneer

1st District Supervisor Rex Bohn said he will turn down yet another raise “I am already making so much money in the Cannabis business I’m running out of ways to launder the money”. That is NOT a quote from good ol’ boy Rex, we just made it up, but sounds about right, doesn’t it?

Rex has previously rejected other approved raises, all while maintaining that the supervisors make relatively low salaries compared to other county department heads.

Voters have contacted Rex in the past week with concerns over the supervisors raising their own pay, but Bohn insisted the supervisors don’t make much, saying he made more money during his time in the private sector, prior to being elected, than he has in the years since.

Rex claims he and his fellow supervisors are among the lowest paid elected officials in the county.

We think its better paid these Supervisors more and then hold them to a much higher standard.

It should be the same with the planning commission, it should be a paid job so we could attract more than just rich developer types to make these important decisions that require so much study.